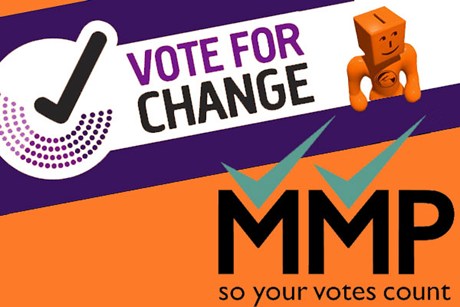 Disclaimer: I am not an expert on MMP and its finer workings, it is just the general concepts I am writing about here.

Once again in October we will be voting for our government using the Mixed Member Proportional (MMP) system. This was implemented in 1996 as a result of pressure from voters and politicians who all realised that the previous First Past The Post (FTP)system was often producing distorted results. MMP was chosen in part because it continued to give voters access to a “local” member of parliament.

Many people do not like MMP and would like to return to FPP or even move to another proportional system such as STV. Given that it would take years and a massive ground swell to change from MMP to another system, and the fact that it would need buy-in by our current politicians, any change Is unlikely in the near future.

Since we have had MMP there have always been a few minor parties in parliament for better or worse. Eg Act, The Green Party, New Zealand First etc. These would never have been parliament if we had continued with FPP.

My reasons against our present system.

One. To qualify for an MP in Parliament a party needs to gain 5% of the total votes (called the threshold) If they gain say only 4.5%, then they do not qualify for an MP and all of people who voted for that party, have in effect ‘wasted their vote” – in a democracy people need to feel that their vote counts. Over the last few elections several parties have spent lots of time, energy and money trying to get to that 5%, only to fall short with say 2, or 3 even 4% with no success.

The effect of this is that if a party looks like it may not get to the 5% minimum and therefore get an MP in parliament, then voters may decide not to vote for them as they do not wish to ‘waste their vote.

Over the years there has been talk of lowering the threshold to say 4%. But in my view this is only fiddling at the edges. The same situation would still apply.

Two. There are a few rules which can result in some unusual situations. Eg what they call the coat-tail effect and the re-distribution of the so- called wasted votes, which may result in what they call an overhang.

Three. It is too complicated. Eg it has taken New Zealanders several election cycles to understand how the two votes work, eg you have a local electorate vote and a party vote and you can “vote tactically” to favour your local candidate whilst voting for another party. Add to this the threshold and the coat-tailing rules mentioned above then how can a first-time New Zealand voter who may have limited English and no experience of democracy be expected to fully or even partially understand the system.

My solution is to make the system very simple.

At present, we have 120 MPs (which is a lot by world standards) and many people resent us having that many. I suggest we should reduce it to 100 MPs exactly and then have a threshold of 1%. Then if a party gets 1% of the total vote, then they will get one MP from their list into parliament - 4% and 4 Mps, etc. This is very simple to understand and would remove the need for any other rules.

It would also allow a new party eg The Opportunities party, or the New Conservatives to gain one or two Mps easily and then to prove their worth or otherwise in parliament. As we all know at present 2 of our 3 “minor” parties are only there for a certain reason, eg New Zealand First because of the Winston factor, and Act because of the “deal done” in the Epsom electorate! Under my suggested changes, parties would get into Parliament purely on merit.

So come on New Zealand what do you think. If you agree with me, then we all need to lobby the current smaller parties to suggest that they push for a change.

This article was submitted by one of our members - Harry Worth